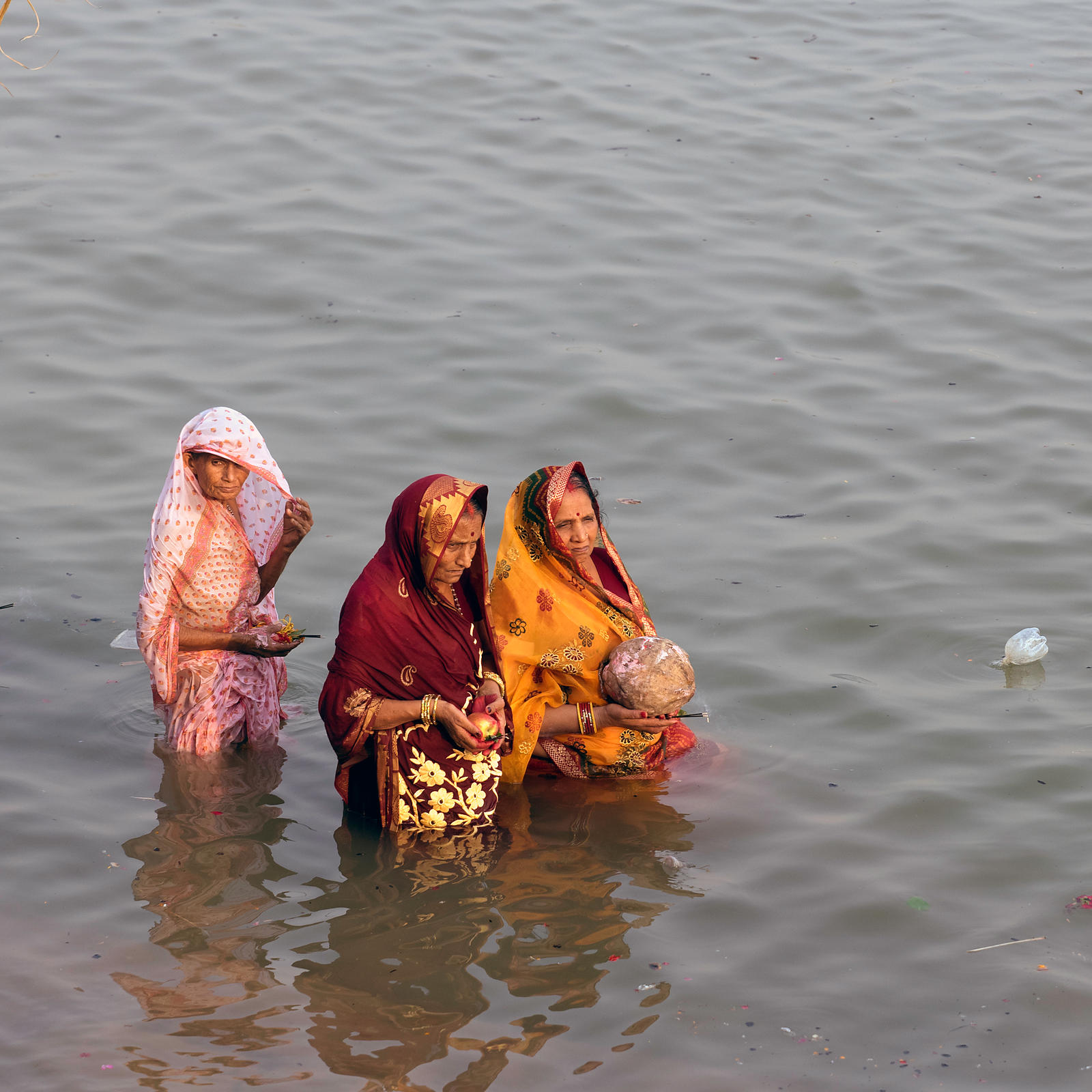 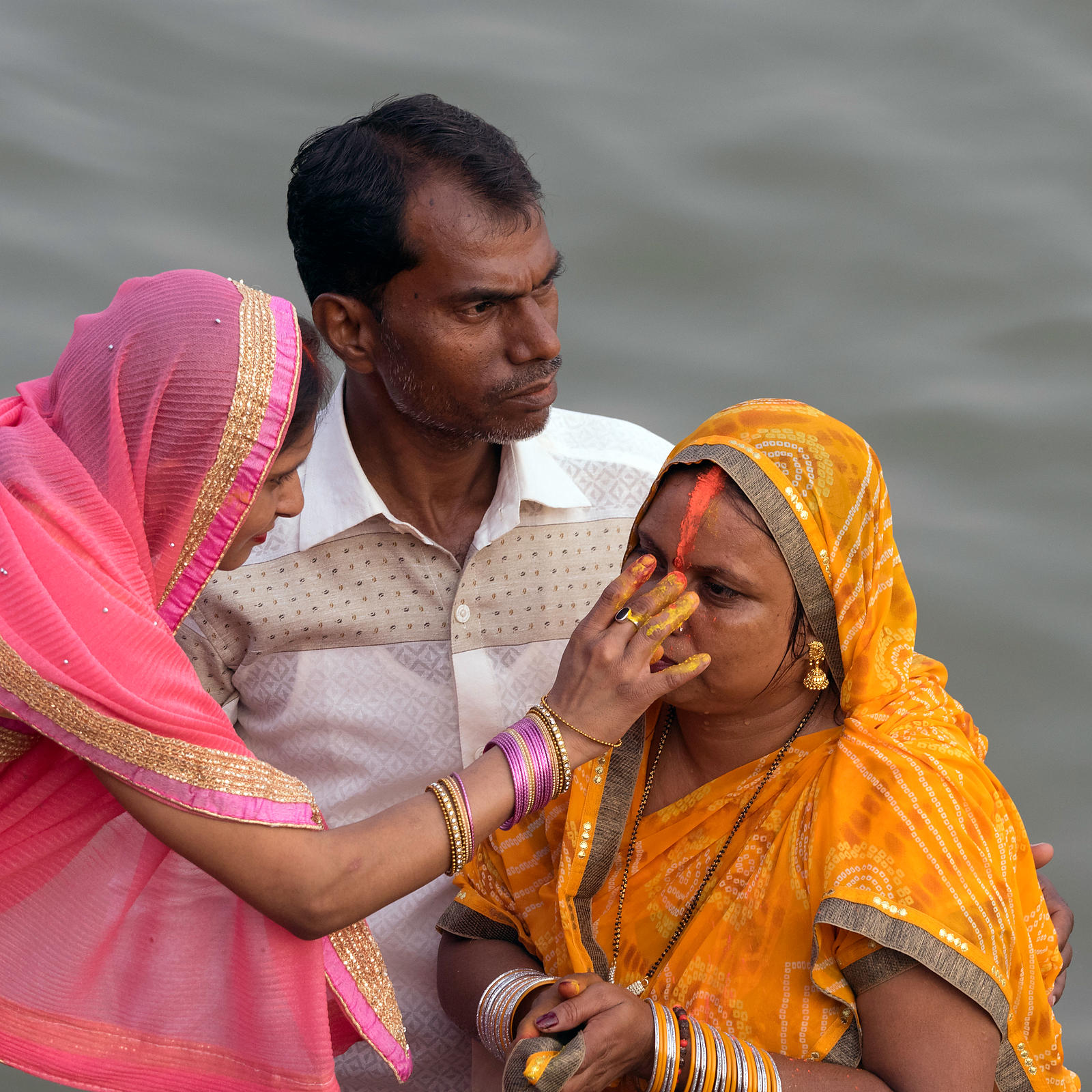 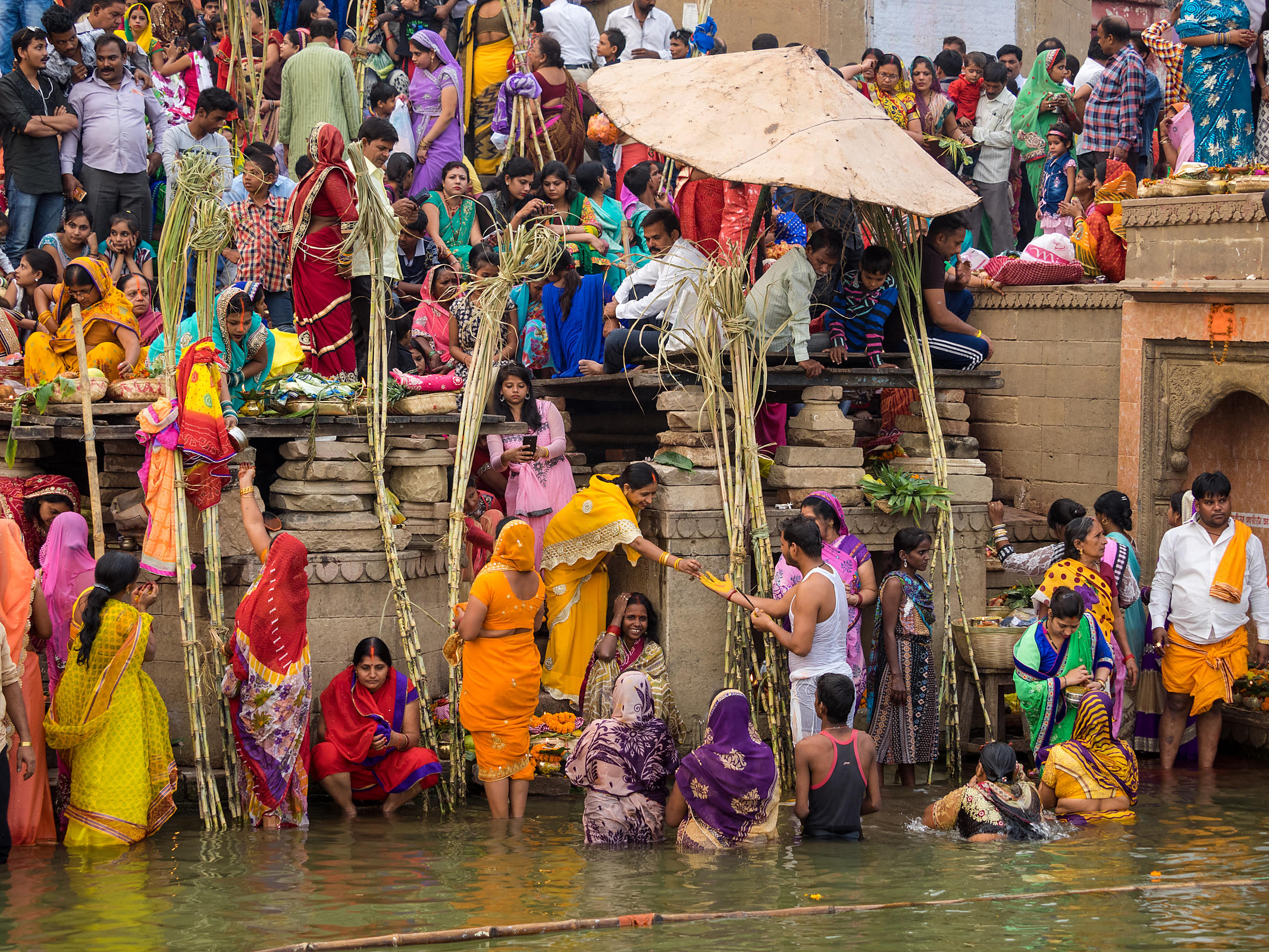 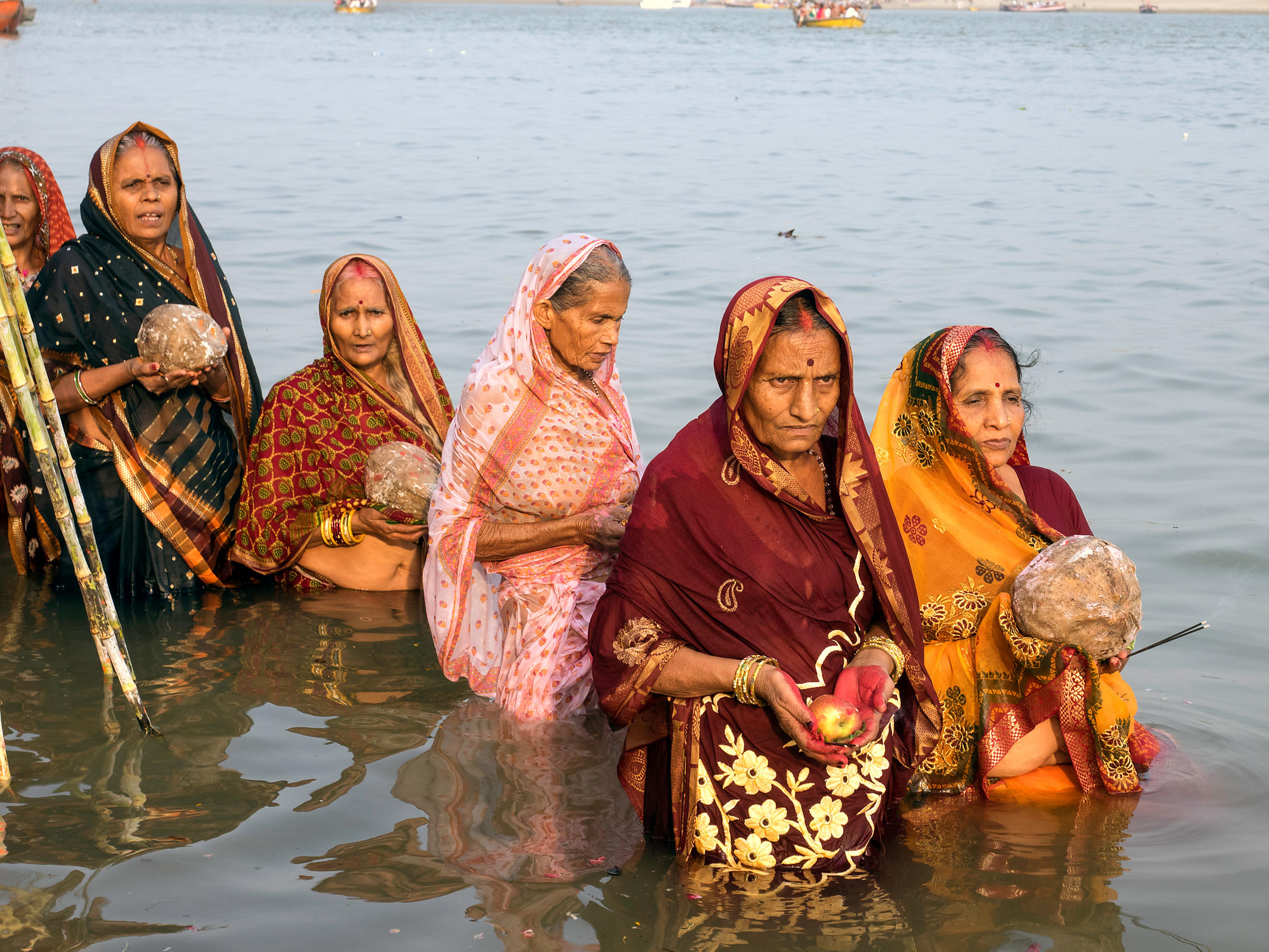 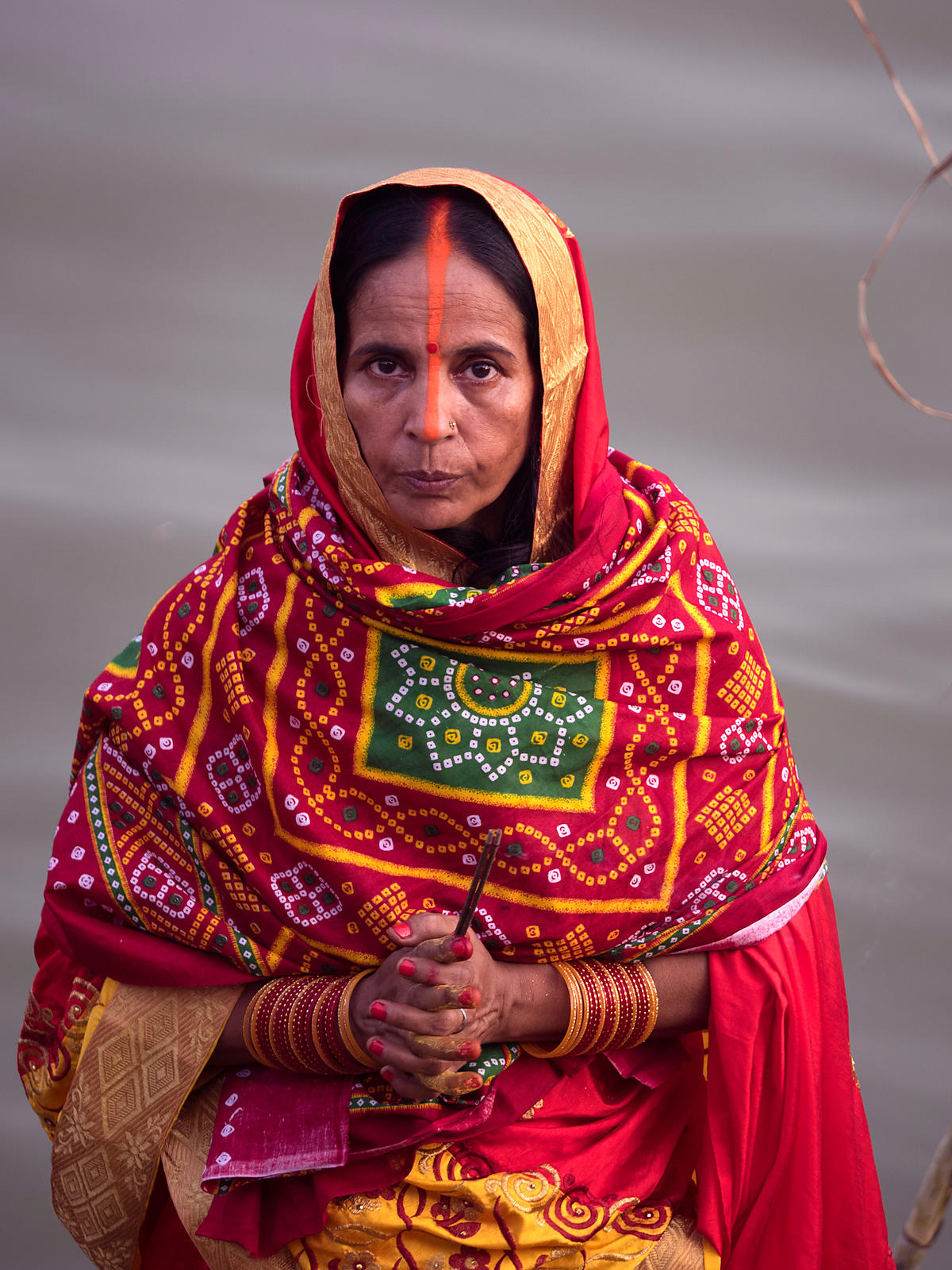 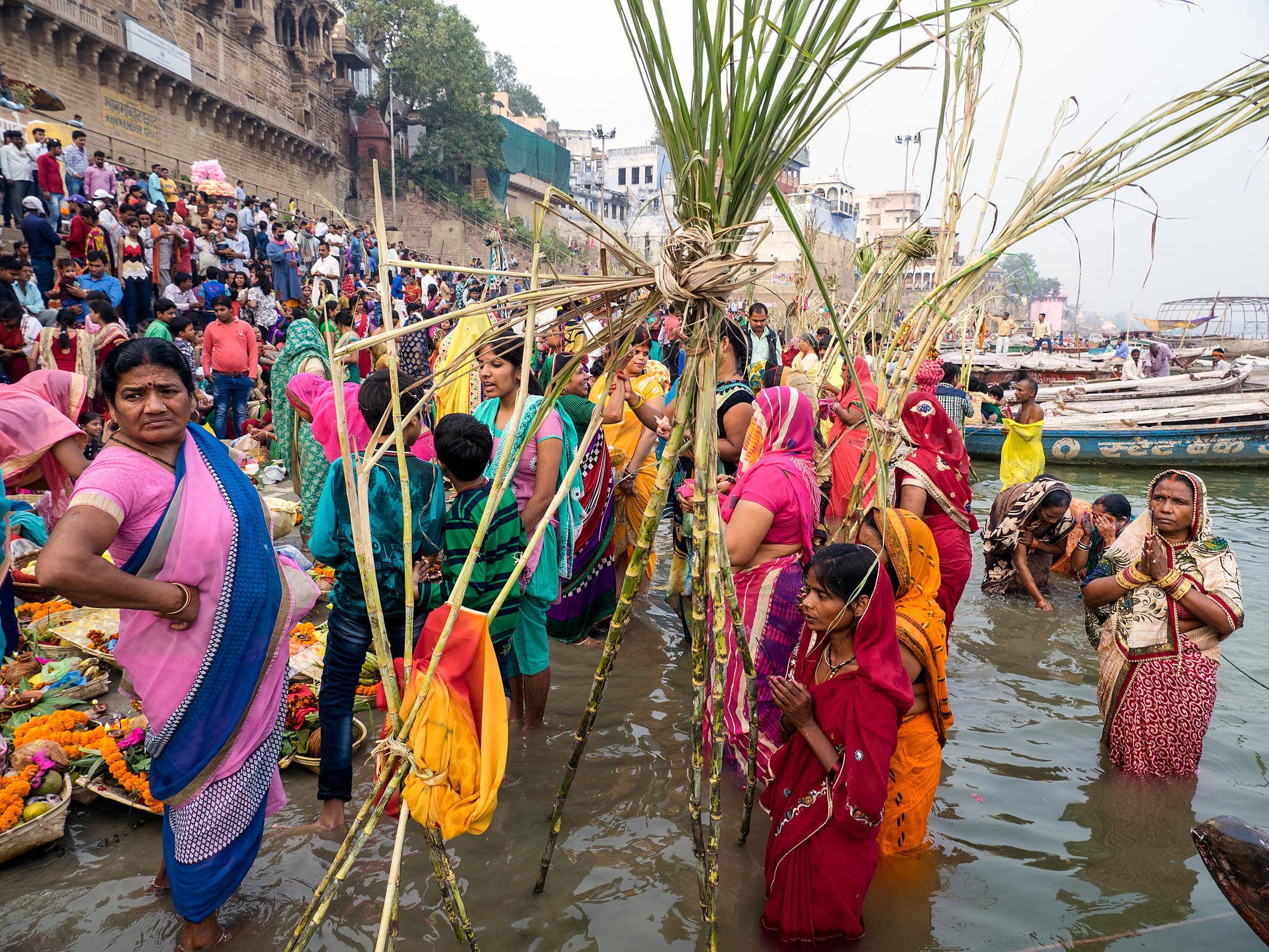 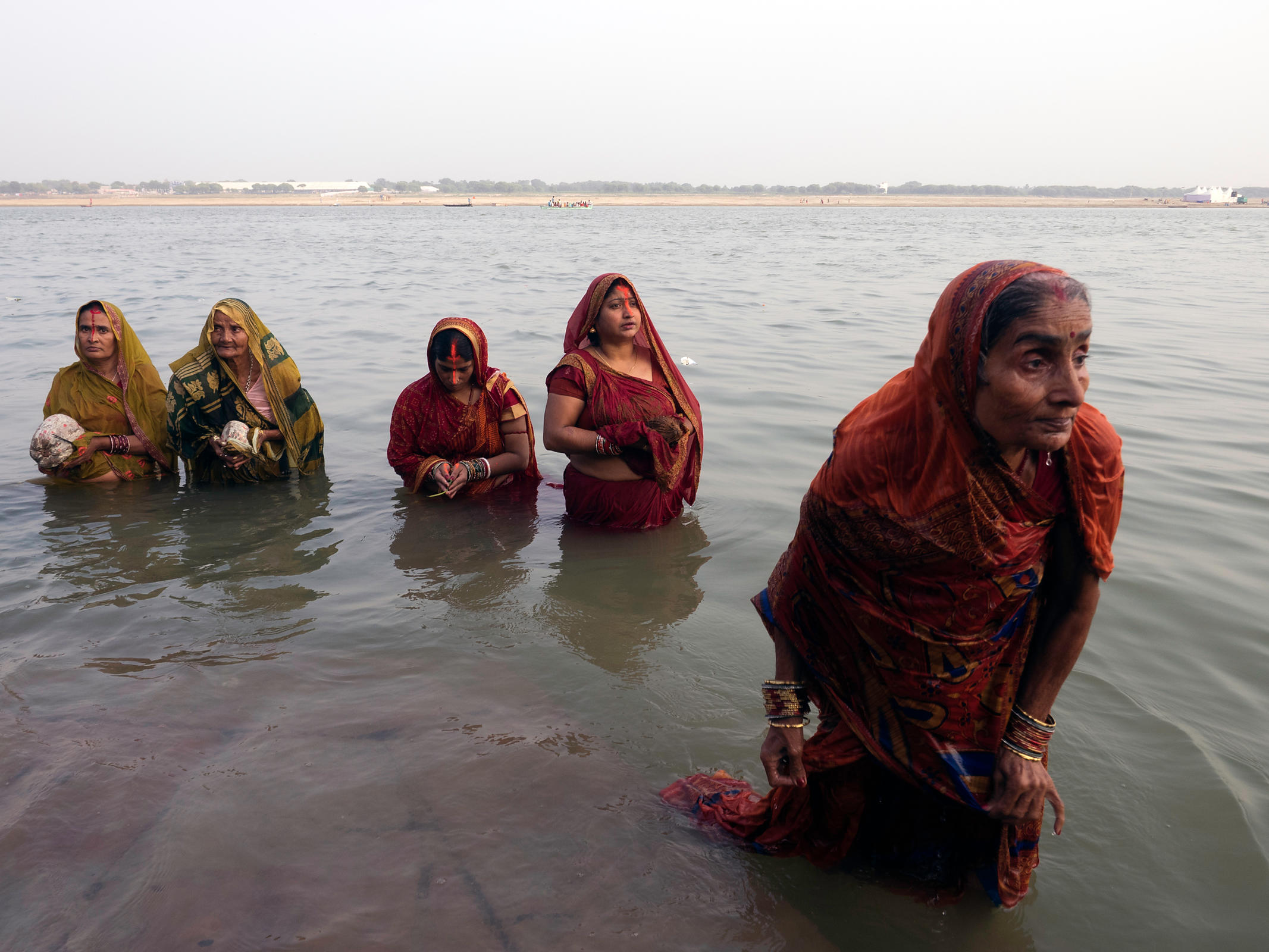 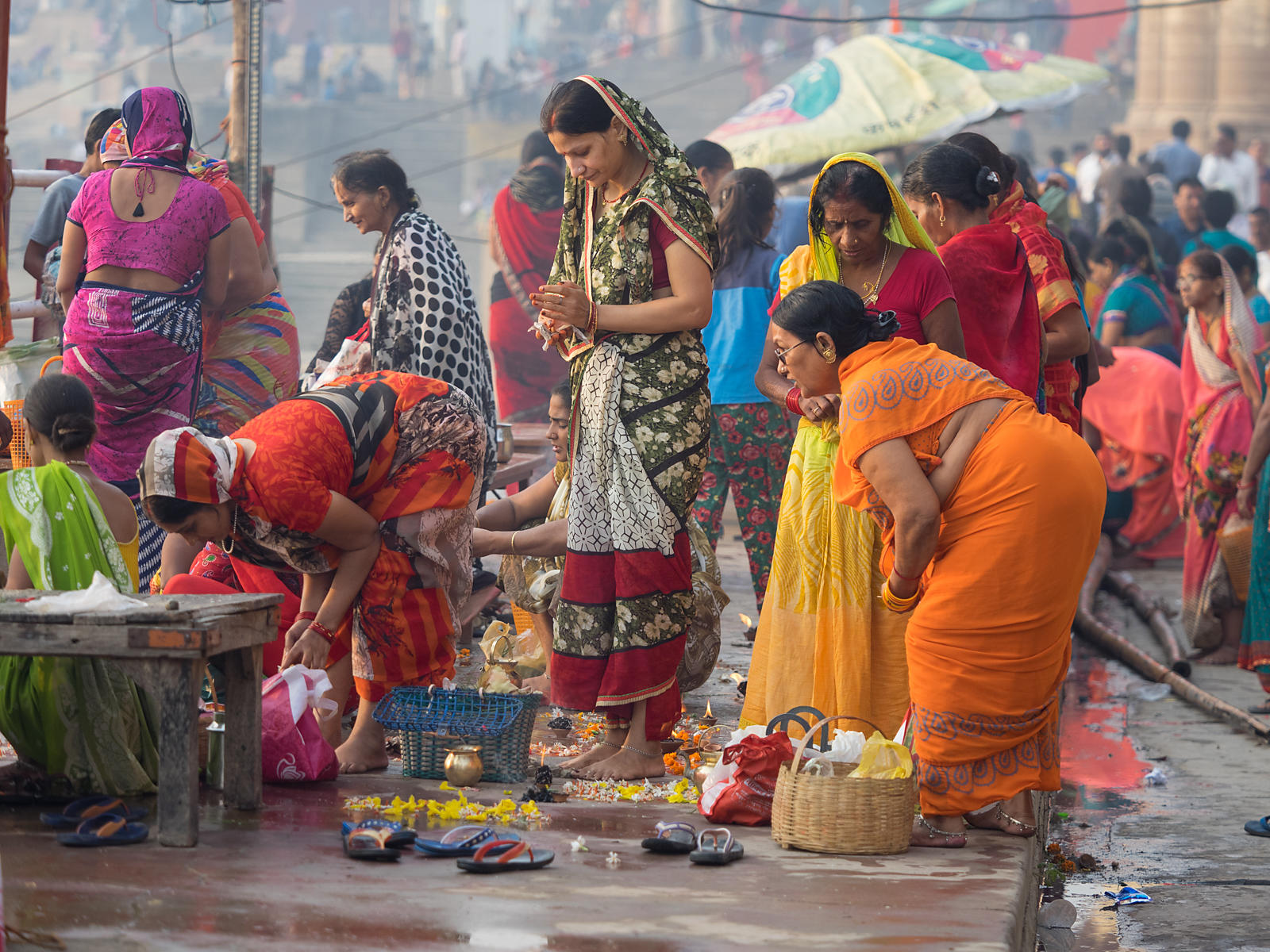 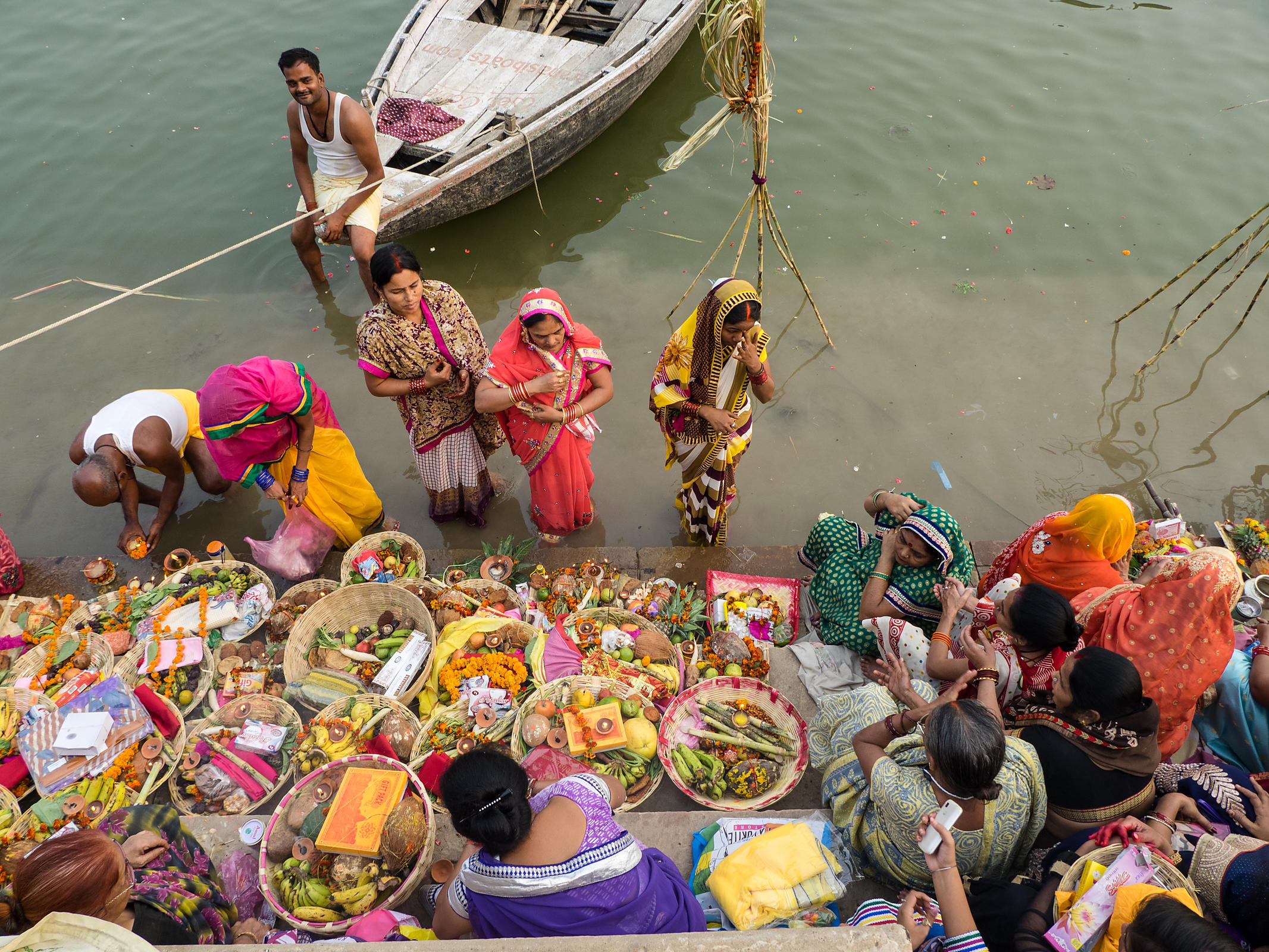 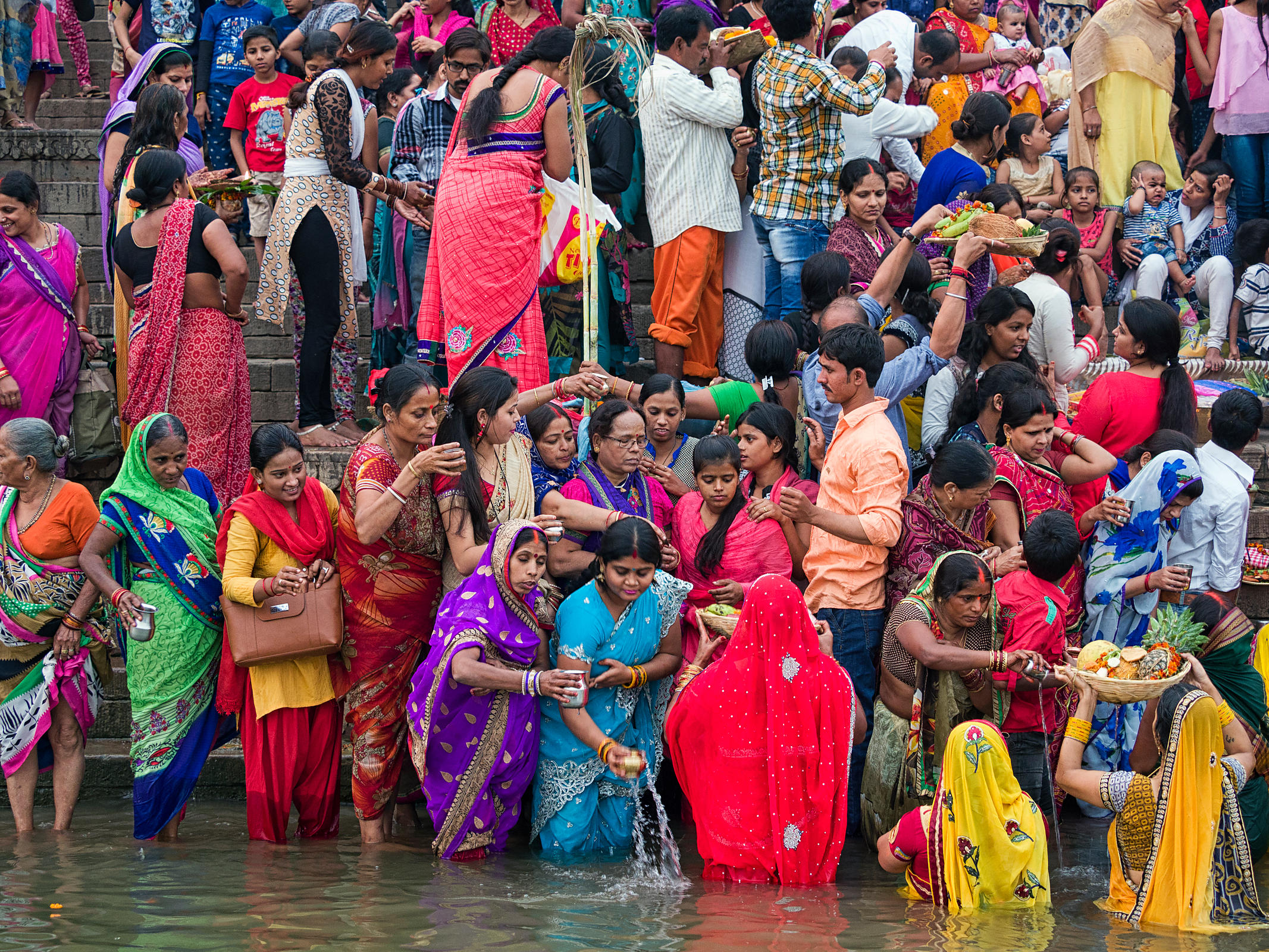 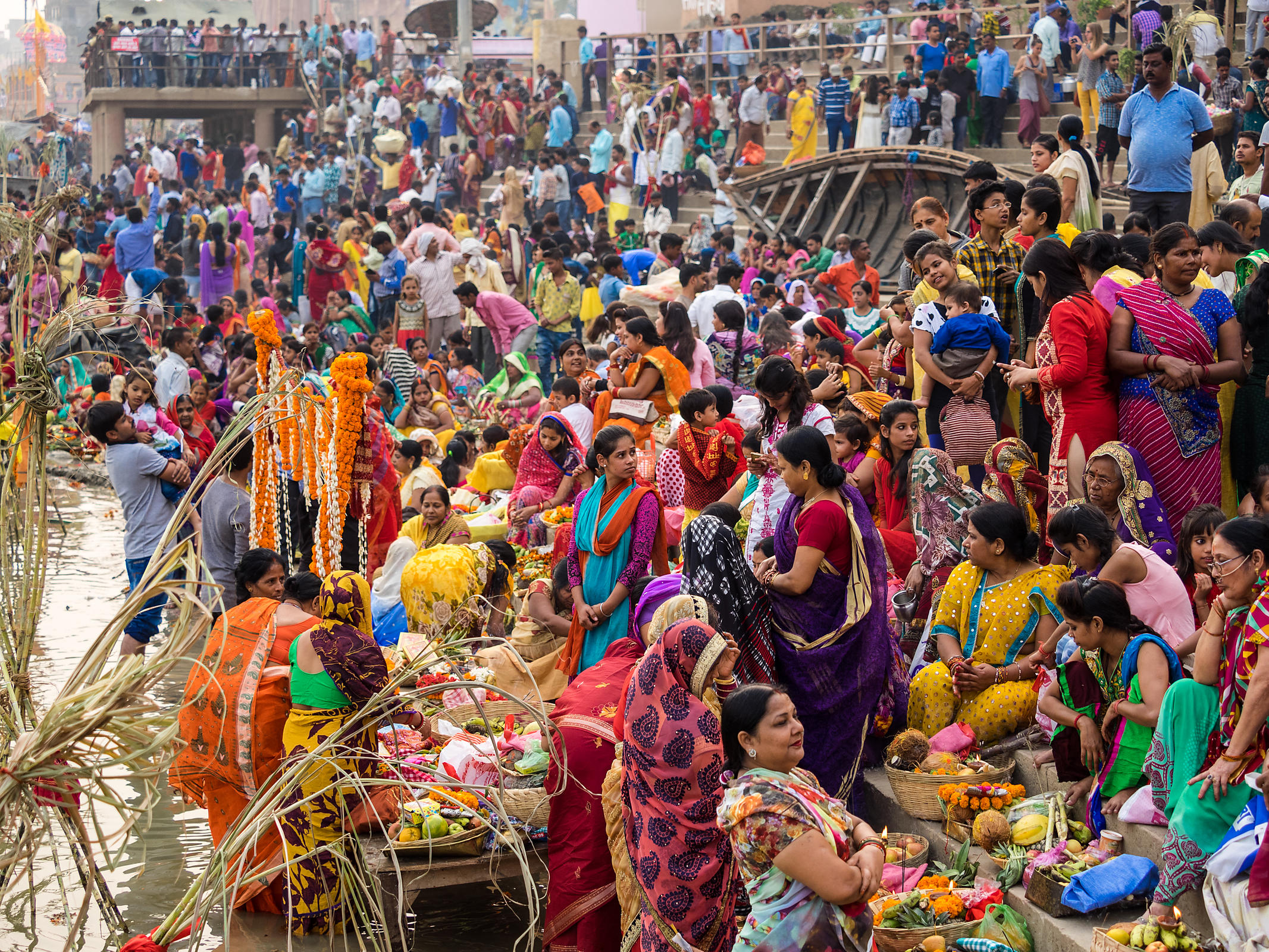 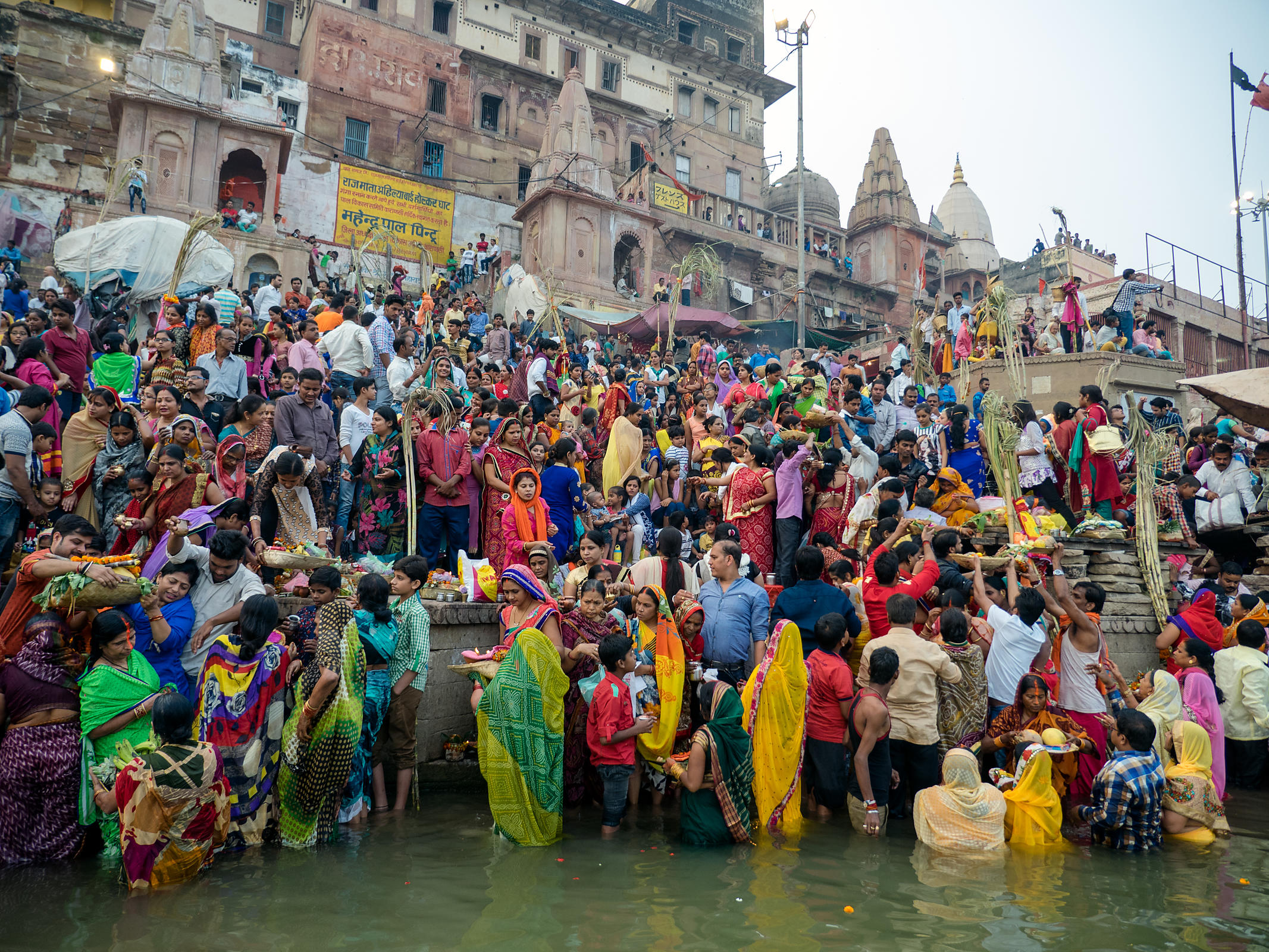 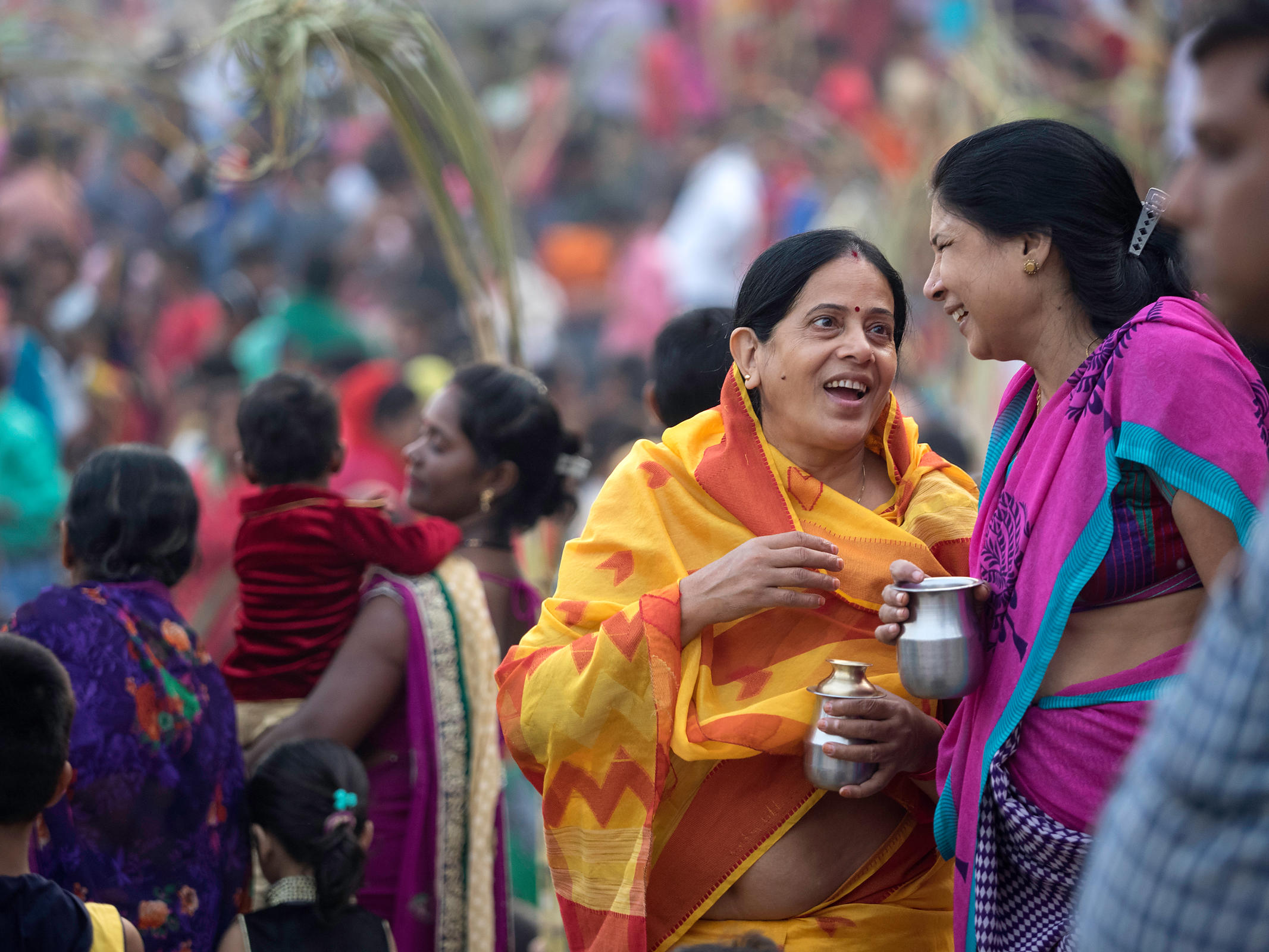 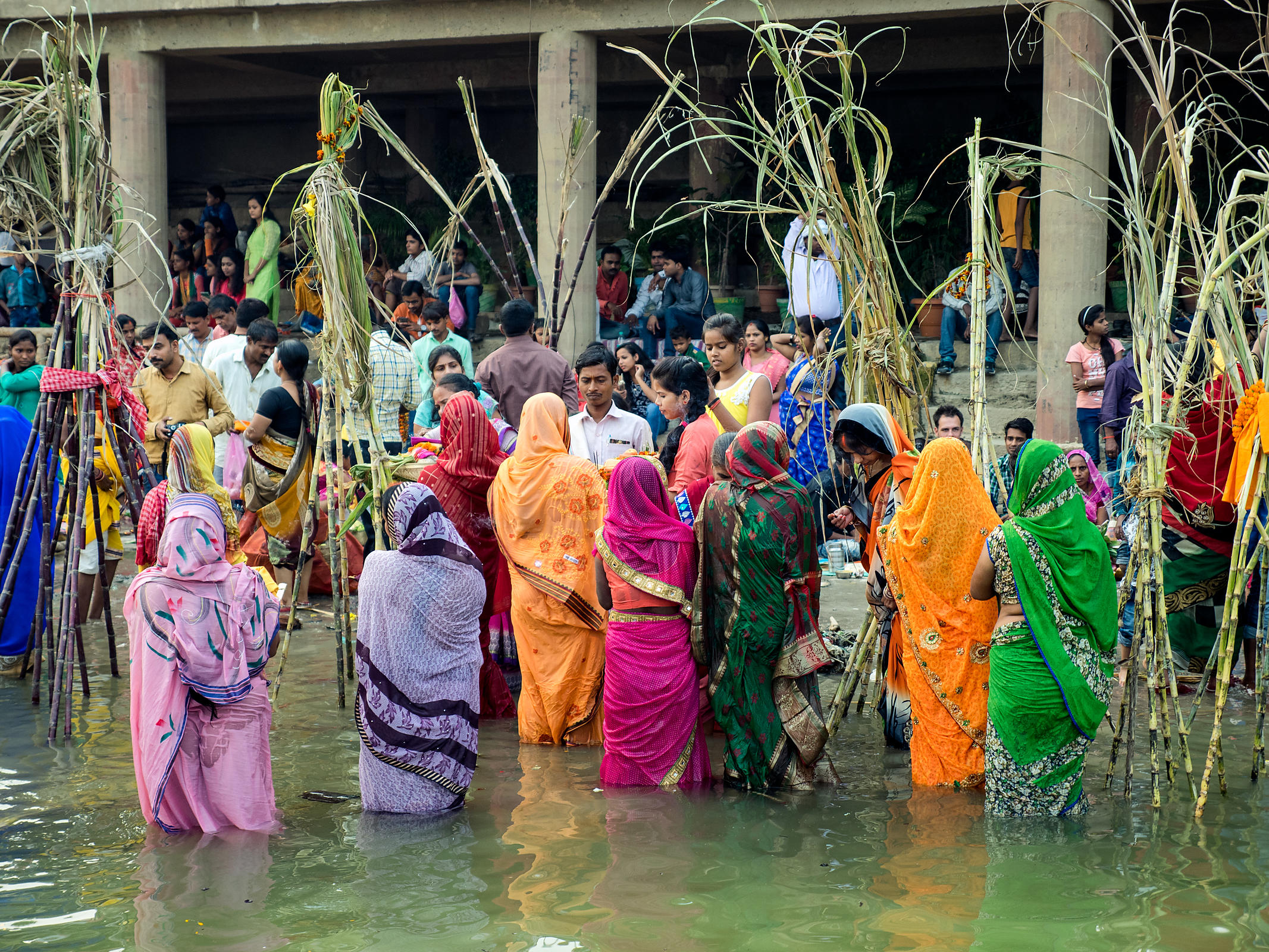 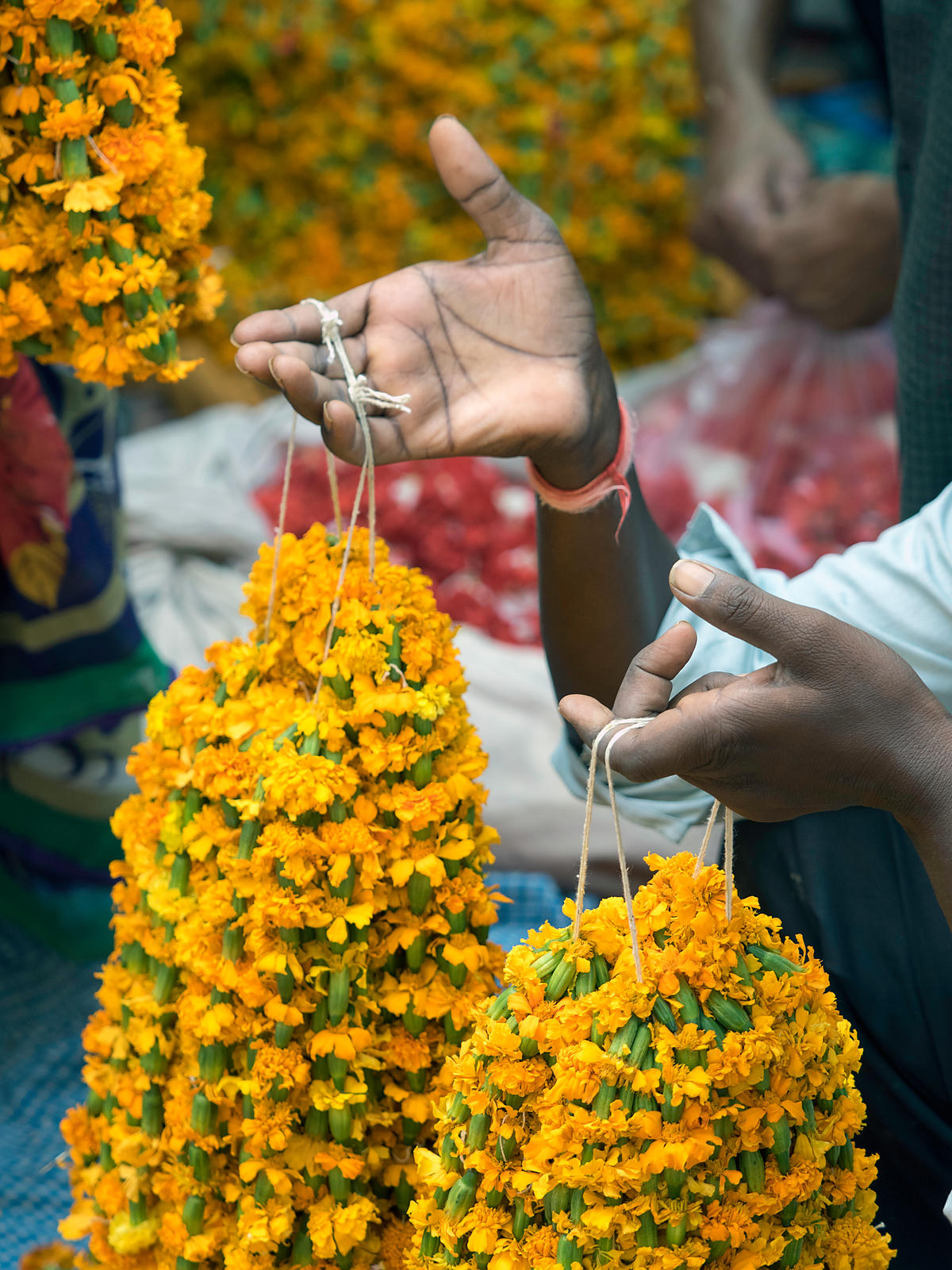 The Chhath Puja, which is also known as Dala Chhath, is a significant festival celebrated in Bihar, Uttar Pradesh as well as many other states of India. The setting sun is worshipped in this puja (prayer ceremony). Chhath puja is celebrated most elaborately in Bihar and also in parts of Uttar Pradesh, Jharkhand, West Bengal, Assam, Orissa and even Mauritius, mostly amongst Bhojpuri and Maithali speaking people. This puja, which has taken place since time immemorial, is a prayer offering to the Sun God, who is said to fulfill the wishes of the pilgrims if the ritual of 'araghya' is offered with complete devotion.
​
It is said that this ancient puja was originally performed by Draupadi, the wife of King Pandavas, during their exile from their kingdom. One day, they were visited by 88 thousand 'Bhikshuk' (wandering hermits). According to Hindu custom, the guests were supposed to be treated well and offered food. However, Pandavas barely had enough food for themselves. Seeing Pandavas in deep trouble, Draupadi asked for help from the noble sage Dhaumya, who, pleased with her devotion to the worship of the Sun God, not only solved their immediate problem, but later helped Pandavas regain his lost Kingdom.

Celebration
The festival connects with purity, devotion and thanks to Sun God as it is the source of life on earth and is observed as the deity who fulfills wishes. The Chhath Puja is done for four days continuously.

Oct 25 — Arrival in Delhi
This morning we will take a 10:30AM flight to Varanasi
O/N Hotel Ganges View or Similar B,D

Day 1, Oct 26—Nahai khai/Arwa Arwain
The first day is known as 'Nahai Khai' which means Bath & Eat. The devotees take a dip, preferably in the river Kosi, river, Karnali and Ganga and carry home the holy water of these historical rivers to prepare the offerings. The house and surroundings are scrupulously cleaned. The ladies observing the Vrata called vratin allow themselves only one meal on this day.
O/N Hotel Ganges View or Similar B,D

Day 2, Oct 27—Lohanda and Kharna(Argasan)
On the second day of Chhath Puja, the day before Chhath, the Vratins observe a fast for the whole day, which ends in the evening a little after sunset. Just after the worship of Sun and moon, the offerings of Kheer (rice delicacy), chappatis (of wheat flour) and bananas, are distributed among family and friends. The Vratins go on a fast without water for 36 hours from 2nd evening onwards
O/N Hotel Ganges View or Similar B,D

Day 3, Oct 28— Sandhya Arghya (evening offerings) OR Pahela Aragh
This day is spent preparing the prasad (offerings) at home. On the eve of this day, the entire household accompanies the Vratins to a riverbank, pond or a common large body of water to make the offerings (Arghya) to the setting sun. It is during this phase of Chhath Puja that the devotees offer prayers to the just setting sun. The occasion is almost a carnival. Besides the Vratins, there are friends and family, and numerous participants and onlookers, all willing to help and receive the blessings of the worshipper. The folk songs sung on the evening of Chhath.
O/N Hotel Ganges View or Similar B,D

Day 4, Oct 29—Usha Arghya (morning offerings) OR Dusra Aragh
On the final day of Chhath Puja, the devotees, along with family and friends, go to the riverbank before sunrise, in order to make the offerings (Arghya) to the rising sun. The festival ends with the breaking of the fast by the Vratins. Friends, Relatives visit the houses of the devotees to receive the prashad.
​
The main worshipers, called Parvaitin are usually women. However, a large number of men also observe this festival as Chhath is not a gender-specific festival. The parvaitin pray for the well-being of their family, and for the prosperity of their offsprings. Once a family starts performing Chhatt Puja, it is their duty to perform it every year and to pass it on to the following generations. The festival is skipped only if there happens to be a death in the family that year.
​
The prasad offerings include sweets, Kheer, Thekua, laddu made of rice grit and fruit (mainly sugarcane, sweet lime and banana) offered in small bamboo soop winnows. The food is strictly vegetarian and is cooked without salt, onions or garlic. Emphasis is put on maintaining the purity of the food
O/N Hotel Ganges View or Similar B,D

Day 5, Oct 30—Return to Delhi
After an early morning shoot we will take our flight back to Delhi where we will join the rest of the group for the tour to Kashmir