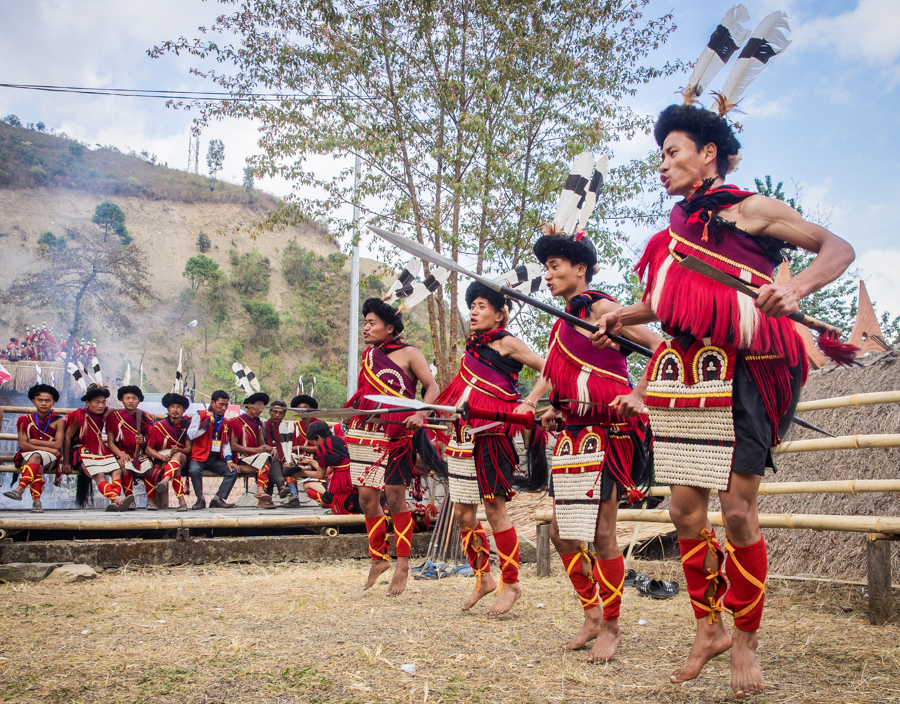 Located in the far reaches of India is Nagaland. Until five years ago this region received few foreign visitors and those who did venture to this northeast Indian state had difficulty believing that it was part of the Indian nation. Head hunting ceased as a practice in the early 1960's but the warrior tradition is still in existence at the Hornbill festival. Only two generations ago tattooed Naga men roamed the countryside wearing hornbill feathers. This signified their manliness and bravery in battle. It is here in early December that sixteen Naga tribes gather for four days to honor their ancestors traditional practices. This patois was initiated in 2000 by Naga officials and it is now a bucket list trip for the adventurous photographer. Photography opportunities are ever present, the hassle factor does not exist and lodging is available and meets western standards.

For four days the lush hills and agricultural region of this Indian state comes alive with music, dance, ceremonial attire and spirit. The men are adorned in beads and ivory armbands, decorated spears are in abundance and traditional head pieces constructed of woven bamboo are adorned with flowers, hornbill feathers and boars teeth. Drumming is constant and traditional dance is captivating and easily photographed. This is not a show for foreigners but a unique indigenous cultural festival that brings people from remote villages in Nagaland together to honor their ancestors.

The sixteen tribes come to the open amphitheater of the festival area that takes place at the Naga Heritage Village, Kisama which is about 10kms from Kohima, the capital city of Nagaland. Traditional Naga huts and Morungs (boy’s dormitories) typical to each of the Naga tribes are built and erected in a way that closely resembles their traditional structures on a small hillock in Kisama. The place itself is scenic and mystical, and the festival is simply epic!

The Hornbill Festival celebrations are marked with a colorful display of traditional dance, sports, and songs of the various Naga tribes. One can easily photograph this colorful and vibrant celebration of a culture that’s so mystic and intriguing. The warrior log drums, the colorful headgear, the soulful war cry, the exquisite costumes are all striking. Delicious local cuisine, and delicacies that are typical to each of the Naga tribes are served in their respective Morungs along with the finest rice beer. The Hornbill Festival of Nagaland, over the years, has evolved from being just a celebration of the culture and tradition of the Nagas into one big cultural event for all the 8 Northeast States. Cultural troupes from all the northeastern states participate during this festival and it is a delight watching all the different cultures coming together under one roof.

The Hornbill Festival is not just about reliving past, it is also a celebration of the present. The biggest Rock Festival of the country is hosted at Kohima every year during the Hornbill Festival. It is believed that singing and dancing is a way of life and comes naturally to the Nagas. Apart from this, an adventure car rally and various other contests and events are also organized.

The Kohima Night Bazaar is also an interesting aspect of the Hornbill Festival. The stretch of the Kohima Main town comes alive at night during the festival with food, music, and fun. The street is crowded with various food stalls serving some of the finest delicacies and it’s simply amazing walking through the hustle-bustle.

Experiences
On this most unique photography tour we will also spend a day immersing ourselves in Kolkata. The street life, architecture, rickshaw pullers, yellow Ambassador taxi cabs and vibe are absolutely wonderful and easily photographed. From Kolkata we will fly to Assam and visit Kaziranga National Park where we will photograph the almost extinct one horn rhinoceros. The group will ride elephants and have two jeep safari rides to photograph these massive animals. The lodge we stay at is full of ambiance and has a unique safari flair.

Saturday , November 26 — Kolkata
Upon arrival in Kolkata, you will be met at the airport by our tour agency representative and driven to the hotel where you will be assisted with check in. The group will get together at around six o'clock and have a trip orientation. Dinner and drinks will follow. Hindustan Hotel

Sunday, November 27 — Kolkata
This city is far different than most major cities in India. Kolkata (formerly Calcutta) is the capital of India's West Bengal state. Founded as an East India Company trading post, it was India's capital under the British Raj from 1773-1911. Today it’s known for its grand colonial architecture. The men dress in western garb and the women in sarees.

After an early breakfast we will proceed for a city photo walk. Our first location will be the vibrant flower markets where we can photograph the buyers and sellers. Next we will go to the Howrah Bridge. It carries approximately 100,000 vehicles and possibly more than 150,000 pedestrians, easily making it the busiest cantilever bridge in the world. The group will also shoot the colonial style government buildings and if time permits take the street car.
​
Later in the day we will explore the narrow and crowded lanes of the “City of Joy”. This teeming slum is where Mother Therese founded her ministry. This is street photography at its best. If the group likes tandoori chicken, we will go to a restaurant that is known to have the finest in the city. Hindustan Hotel

Monday, November 28 — Kolkata – Jorhat or Guwahati – Kaziranga National Park
In the morning we will be transferred to the airrport for our flight to Jorhat or Guwahati. In the far northeast of India if a plane isn't full it will not depart, so at this time it is impossible to know which city we will fly into. Jorhat has a basic landing strip with infrequent flights and is two hours away from the safari park. If we land in Guwahati the drive will take five hours. Kaziranga National Park is located in Assam and the ride is scenic with tea plantations lining the road.

Kaziranga National Park has tall, dense grasslands interspersed with tropical wet evergreen forests and tropical semi-evergreen forests, interconnecting streams and numerous small lakes against a backdrop of the majestic Eastern Himalayas. Kaziranga National Park is a World Heritage Site and a beautiful national park. Two thirds of the total population of the one-horned rhinos is in this park. It also has the highest density of tiger population in any protected area in the world. We will overnight at the Infinity Resort which is a lodge full of ambiance. We will have a jeep ride late in the afternoon.
Infinity Resort

Tuesday, November 29 — Kaziranga National Park
Today at Kaziranga we will take one elephant safari and one jeep safari. Early in the morning we will go for an elephant safari to photograph the wildlife. The elephant safari will take us in close proximity to these massive rhinos giving us a good opportunity to capture images of them from different vantage points. We will also visit nearby villages for some more photo-ops.
Infinity Resort

Wednesday, November 30 — Kaziranga National Park – Kohima
The ride to the Hornbill Festival in Kohima should take five hours. We will travel three per car. The photography group will stop for lunch along the way

Each of the 16 major tribes and many sub-tribes in the State have its own way of maintaining its distinctive cultural traditions and customs, through various forms of performing arts, which are an integral part of Naga festivals. The colourful and intricately designed costumes, jewellery and beads that its members wear can distinguish each of the tribal communities that dwell in the hills. The traditional ceremonial attire of each tribe is different from that of the other. There are the multi-coloured spears and daos decorated with dyed goat's hair, the headgear made of finely woven bamboo interlaced with orchid stems and adorned with boar's teeth and hornbill's feathers, and ivory armlets. In years past, warriors had to prove their valor if they wanted to wear these.

Nagas are admired for their rich repertoire of folk dance and songs. Even though they are joining the modern world the Naga people still have a penchant for vibrant dances and songs praising the brave deeds of ancient warriors and folk heroes. They love songs that imortalize tragic events, gospel and folk tunes. Once there we will photograph the main street and orient ourselves to the festival. Vivor Hotel

Thursday, Friday and Saturday, December 1-3 — Kohima
The next three days we will spend covering this beautiful festival. The group will spend the days shooting, experiencing great culture, food and interacting with the tribes and capturing amazing images! The group will have box lunches so that we can devote the entire time their photography. Our lodge is in Kohima and well-appointed. The festival takes place out of the city and takes around half an hour to reach The highlight of the festival is the traditional stone pull contest. Hundreds of men, decked out in traditional attire pull this massive 15-foot-long by 4-foot-wide log tied with vines. The group can wander independently as the Naga people are friendly and open to being photographed. One evening we will have an image critique.
The group will also visit Khonoma Village which is a traditional highland village. Vivor Hotel
​

Sunday December 4th — Dimapur – Kolkata
After breakfast we will drive to Dimapur airport to board our flight back to Kolkata. Upon return to Kolkata we will have lunch and go out for a late afternoon photo shoot. The Bagbazaar neighborhood is a tapestry of colors, rickshaw pullers and street life. Farewell dinner in a traditional East Bengal restaurant. Hyatt Regency Kolkata

Monday, December 5th
Transportation will be provided to the airport. Another trip, another photography experience.